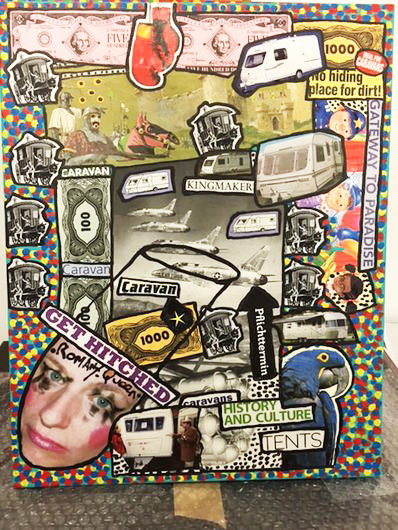 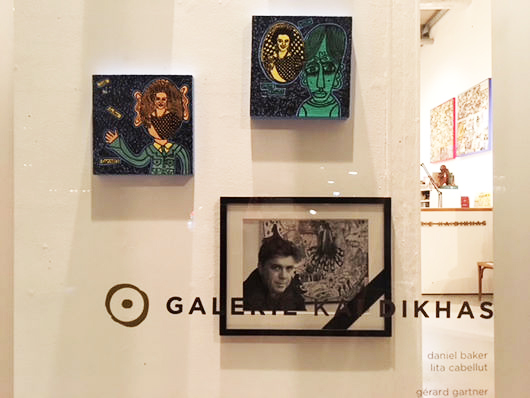 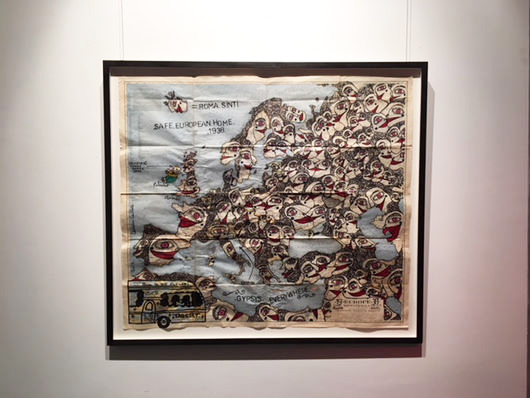 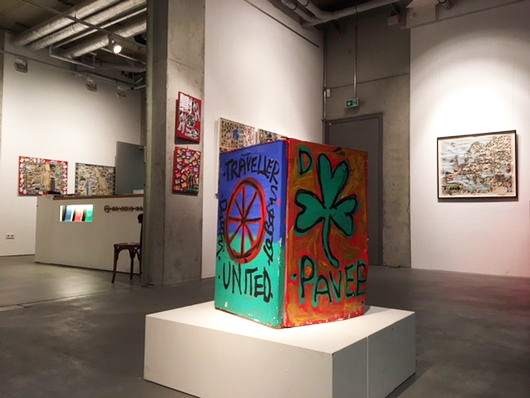 Damian Le Bas died unexpectedly and far too early on December 9, 2017. Damian Le Bas was closely associated with the Kai Dikhas Gallery right from its very beginning, whereby his stance was pivotal in many of our exhibitions. One night in the living room of the Le Bas family, his idea of a contemporary art gallery for Sinti and Roma artists was born. And his art never sleeps.

Always politically subversive, but also humorous, Damian Le Bas was an important pioneer within the Roma emancipation movement. The London Time wrote on January 11, 2018: “[he was] literally putting gypsies on the map”. In his art, he reacted to the frequent resistance, discrimination and limitations faced by the Roma minority with articulate and disarming wit. As a passionate music collector, he knew how to unite seemingly different worlds – from Victorian children’s images to political agitation – in an imaginative, “musical” way. In doing so, he resorted playfully to the rich resources of European Romany cultures. He used traditional symbols freely and also the stereotypes attributed to the Roma minority (often to the annoyance of those dealing with antiziganism). Many of his works contain terms such as the word “gypsy”, which is the usual self-designation of Romany Travellers in England, but which is rejected by most Roma on the continent as a derivative of the false designation “Egyptians”. His images are teaming with traditional Roma wagons. And he also hints at deceptiveness with a wink of the eye. The result is a serious parallel world, which defies the bourgeoisie status quo with self-confidence. His recurring alter ego, a Victorian magician with a top hat who appears at an English fairytale market, effortlessly overcomes borders, barbed wire and conventions. Where Damian has appeared, where his art is present, is “Gypsyland”, a utopian world free of expulsion and oppression.

Damian Le Bas studied at the Royal College of Art in London. Nevertheless, he felt attached to Art Brut, which in promoting an anti-academic attitude, includes the art of amateurs and the mentally ill. Outsider Art, as a counter-draft to the regulated, limited and politically sobering real world, was his program. The term “Gypsy Dada”, coined by Le Bas together with his artist friend Gabi Jiménez, uses the power of a modernist art movement toward a comprehensive liberation. The current successes in the Roma emancipation movement, which through the arts have led to new institutions, prove that art has now become an effective political means of self-representation and infiltration of the repressive mechanisms to which the Roma are exposed. Damian Le Bas played a major role in this process.

The exhibition GATEWAY TO PARADISE is an homage to a great artist. We are fortunate to be able to immerse ourselves in a retrospective of his fascinating works of the last ten years. His art is the legacy that remains with us.